Chloe (クロエ) is an anime-only character from the first season of the animated adaptation. Although she only appears in three episodes, Chloe serves as the face of the forces opposing Holo and Lawrence during the currency speculation incident. Her inclusion in the anime is intended to evoke a greater emotional response from viewers, as her counterpart in the light novels and manga is male, Yarei, and less attached to Lawrence. It also fixes one of the plotholes of the novel, how Holo knew who her captor was, as she never really met Yarei but was still able to tell Lawrence about it.

Hailing from the farming village of Pasloe, Chloe has known Lawrence for a long time as a mentor, friend, and unrequited love interest. She desires to be Lawrence's business partner, paradoxically expressing her complicated interest in him yet simultaneously masking her feelings with a professional excuse.

Chloe is a pretty young woman with mahogany hair, violet eyes, and impressively pale skin despite working in wheat fields. She is ambitious, progressive, resolute, and talented, all promising qualities for a merchant. Unfortunately, she is professional to a fault, valuing an unscrupulous deal over friendship and even human life. Her progressive mindset, typical of the Pasloe villagers, also makes her dismiss Holo as an obsolete deity not worthy of praise. Her attitude earned a wrath from Holo and Lawrence broke off their friendship because of her involvement to turn Holo over to the Church.

Chloe's merchant skills, acquired from Lawrence, make her a key negotiator in business dealings on behalf of the village. This role eventually puts her at odds with Lawrence when her village, Earl Erhendott, and Medio Trading attempt to manipulate the value of Trenni silver coins by spreading false rumors among minor merchants. As the ultimate goal of the conspirators is to obtain considerable concessions from the Kingdom of Trenni, Pasloe stands to gain significant economic benefits, including elimination of the wheat tariff. Unfortunately, Lawrence discovers the plot and allies with Milone Trading to manipulate events to his advantage, not knowing that Chloe and Pasloe are involved.

Given her familiarity with Lawrence, Chloe is charged with stopping him. She attempts a straightforward kidnapping, but her men only capture Holo, inducing Lawrence and Milone Trading to stage a dramatic rescue. Chloe and her men give chase and nearly lose their lives when they corner Holo and Lawrence in the city's underground sewers and face the full wrath of Holo's wolf form. Chloe faints when Holo nearly eats her and is last seen seated in bed, recovering after the incident.

The incident left their plot in comlete failure and Lawrence effectively broke off ties with Chloe because of her attitude towards Holo.

She made her ver last camio appearance during the credits of the first season's finale whilst looking over the village of Pasloe from a hill. 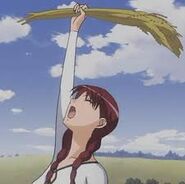 Add a photo to this gallery
Retrieved from "https://spiceandwolf.fandom.com/wiki/Chloe?oldid=6174"
Community content is available under CC-BY-SA unless otherwise noted.