Dian Rubens (ディアン・ルーベンス), also known as Dianna Rubens (ディアナ・ルーベンス), first appears in volume three of the light novels as a reclusive alchemist and town chronicler living in the slums of Kumerson. Her life's work appears to be gathering and compiling the many pagan tales and beliefs of the region for posterity, a lonely task that fills her unkempt home with stacks of dusty books. Aside from a unique relationship with Gi Batos, Dian does not usually welcome visitors or accept requests unless they provide a pass-phrase.

Dian is an attractive woman with long black hair, pale skin and blue eyes. Her clean appearance somewhat clashes with the dim, messy home that she keeps. She almost always has a smile on her face.

Given her solitary nature and masculine name, Dian is often mistaken to be male, an assumption that Lawrence also makes to his embarrassment when he first meets her. Dian asks Lawrence to call her Dianna as a gesture of friendship. She has a fondness for old stories and legends and usually asks her few guest to share their stories with her.

During the pyrite speculation incident, Holo and Lawrence independently seek Dian for information about Yoitsu, Holo's birthplace, and in order to purchase pyrite as part of a dramatic scheme to best Fermi Amati. Dian takes the opportunity to learn the story behind her two unlikely guests, elucidates the various layers of their strained relationship, and then subtly manipulates the stock of pyrite in her possession to bring Holo and Lawrence closer together.

Given her solitary nature and masculine name, Dian is often mistaken to be male, an assumption that Lawrence also makes to his embarrassment when he first meets her. Dian asks Lawrence to call her Dianna as a gesture of friendship. According to Holo, however, Dian hides a much bigger secret than her nickname: she is actually a giant bird deity. She fell in love with a traveling priest and spent a few years helping him to build a church. Unfortunately, the priest noticed that she never seemed to age and became suspicious, forcing Dian to leave her love behind.

Like Holo, Dian is a animal deity and has several supernatural abilities. 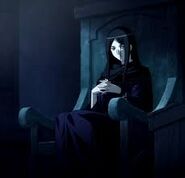 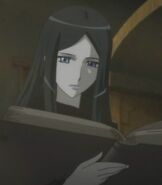 Add a photo to this gallery
Retrieved from "https://spiceandwolf.fandom.com/wiki/Dian_Rubens?oldid=8295"
Community content is available under CC-BY-SA unless otherwise noted.