This article is a stub. You can help The Spice & Wolf Wiki by expanding it.

Fleur von Eiterzental Mariel Boland (フルール・フォン・イーターゼンテル・マリエル・ボラン), generally referred to as Eve Boland, is a female statue merchant in the port town of Lenos.

Eve is almost always covered up with a large dark cloak and turban. She is around 20 to 25 years old with short blonde hair and blue eyes. She is about the same height as Lawrence.

In the light novel, we learn that she was a former noble. Her family was deposted and her husband abandoned her. She became a sly trader.

Eve is usually cloaked and shrouded in mysteries. Due to events in the past, this trader is wary of just about everyone. Although hard to approach, Eve is talkative under the right circumstances and has a keen eye for people and business alike. She is in fact a fallen noble that was once sold as a slave to another merchant after her family's fall. She has described herself as charming. She organized a secret smuggling operation with the church then left it after she felt that they don't need her cooperation anymore then made a contract with Lawrence, though it turned out that Eve betrayed Lawrence, taking his share with her after knocking him unconscious. 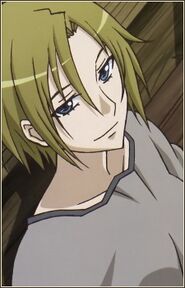 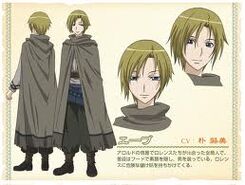 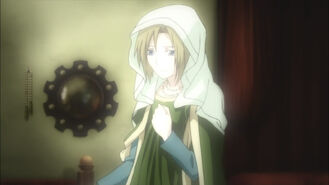 Eve as a Noble 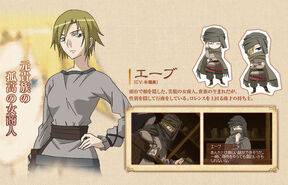 Add a photo to this gallery
Retrieved from "https://spiceandwolf.fandom.com/wiki/Eve_Boland?oldid=8512"
Community content is available under CC-BY-SA unless otherwise noted.