Fermi Amarti (フェルミ・アマーティ) is a character that appears in Spice and Wolf Series 2. (His first appearance in the light novel series is in volume 3) He is a merchant like Kraft Lawrence, and develops a crush on Holo which leads him to propose to her.

Amarti is a very young boy around 15 to 16. He has short blonde hair and blue eyes. Hear wears large black cape along with a casual attire.

Fermi Amarti, like Kraft Lawrence, uses his last name for business. He is first seen as a fish broker outside the town of Kumerson by Lawrence and Holo. He takes interest in Holo romantically. Holo had come up with an elaborate ruse that she was a nun travelling with Lawrence to repay her debt to him, so he says to Lawrence he will buy her freedom then propose to her. He has a contract stating this, and presents this contract to Lawrence. Lawrence agrees to the contract. Eventually, Amati decides to give up on the marriage proposal after some unlucky happenings in the pyrite market (which is a very popular good at the time in Kumerson, the town they were in when this happened), causing him to lose the money. 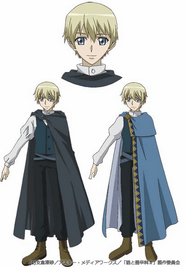 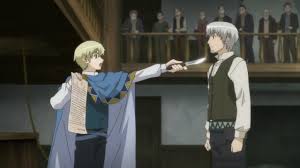 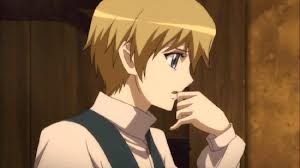 Amarti ploting
Add a photo to this gallery
Retrieved from "https://spiceandwolf.fandom.com/wiki/Fermi_Amarti?oldid=6200"
Community content is available under CC-BY-SA unless otherwise noted.