Helena is a hostess at a bar in Lenos. She is a minor character in season 2 of Spice and Wolf.

She is young attractive girl around the age of 16 to 18. She has short brunnette hair and has light purple eyes. She has only been seen in her work attire. A cream color shirt and skirt with a black collar/ Over that she wears a light tan apron with several patches.

Helena is a very cheerful person and comes off as flirtaious at least with her customers. Though she works as a hostess she makes extra money on the side by being an informat that gives the information to people who are willing to pay. The information she gives is often on the status of the town's economic state most notably the fur trade. She has taken quite a liking to Lawrence, strongly flirts with him even though she knows he is companied by a women (Holo). 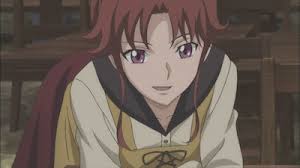 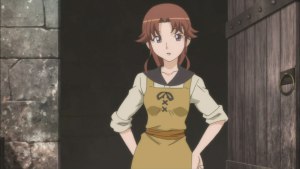 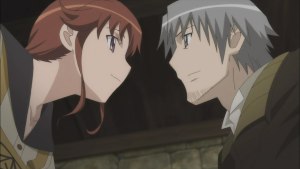 Add a photo to this gallery
Retrieved from "https://spiceandwolf.fandom.com/wiki/Helena?oldid=6198"
Community content is available under CC-BY-SA unless otherwise noted.