Holo (ホロ) is a female demi-human wolf and the protagonist of the light novel, manga and anime series Spice & Wolf.

Holo is a demi-human wolf that was bound by a promise to the town of Pasloe for several centuries, ensuring a bountiful harvest of wheat for the residents. As the villagers became more self-reliant with time, however, Holo was neglected. Feeling unneeded and that she had kept her promise long enough, she skipped town with a traveling merchant named Lawrence, by 'jumping' from the villagers' wheat to Lawrence's wheat in his wagon. She longs to return to Yoitsu, her snowy homeland and makes a contract with Lawrence to accompany her there.

Holo has fangs for canine teeth. At the beginning of her transformation, all her teeth morph into fangs.

In her human form, Holo appears as a 15-year-old girl with long orange/brown hair and red eyes, although she still retains her wolf ears and tail. Due to her trademark ears and tail, Holo often has to wear a hooded robe or headscarf, and long voluminous skirts that hide her unusual features from people, which she dislikes as she adores her tail. Holo's true form is a giant brownish golden wolf. In her wolf form, her eyes stay red, but her sclera turns yellow, and her fur is the same color as her hair in human form. Her size is massive: a little bit bigger than an elephant. In her wolf form, she is able to talk through a form of telepathy and is capable of reaching unimaginable speeds. After forming a contract with Lawrence, Holo wears clothes and a simple hood she found in Lawrence's wagon.

The outfit she first wears is actually Lawrence's best clothes (collected over a period of ten years), consisting of a purple shirt with a black, fur-lined vest, a black skirt, black and white pants, and a long beige hooded robe. The linings are bear fur and were made with quality tailoring.

After the incidents in Pazzio in which the clothes were destroyed during transformation, Holo purchases a pink shirt with purple trim, black pants with matching cuff trim, a red silk sash, a light Blue/Cyan anklet on her right ankle, two high quality hooded robes, and cow leather traveling shoes. Lawrence later gets a deal on clothes for Holo that was once worn by a noble: a headscarf made of white rabbit fur trimmed in dark red (so she doesn't have to have a hood up in public all the time), and a black collared short cape fastened with a walnut button and matching trim. She takes care to strip nude first before she has to transform.

Holo is only able to change form by consuming a few wheat grains or drinking some fresh blood. (The English vocal script recorded that it was only human blood she could use, but that was not in the subtitle translation.)

Holo is smart and confident, though the latter is mostly seen around Lawrence (probably because he is the person she is most comfortable with). She is considered to be flirtatious and manipulative towards him, while often mocking his (supposed) thinking and negotiating skills. However, she seems to have a really deep fear of being alone, and having grown fond of Lawrence as her company, she nurtures a strong affection for him. She is also seen to feel uneasy about showing him her wolf form, but will do so in order to protect him, even if it means putting her life at risk. She is usually good-humored and talkative. She speaks in a formal manner that might be expected of people during her younger centuries, and rarely, if ever, uses contractions.

Holo is a massive alcoholic, often drinking when having the chance to do so and usually getting drunk because of it, though being somewhat able to sustain her wit. She is also somewhat of a glutton. She often convinces Lawrence (usually using her feminine charm) to buy her food, which is usually in large quantities and, at times, expensive. This might just be because she is really a massive wolf and needs the appropriate amount of nutrition. A perfect example of this was when she bought over 80 apples, her favorite food, with Lawrence's money without his permission (which was the beginning of a large and growing debt with Lawrence). She also appreciates how different human food is compared to foraging in the forest, especially how cooking changes it.

Holo does experience jealousy toward other girls who talk to Lawrence. This is not shown better than with her and Lawrence meeting the lovely shepherd girl Nora Arendt. Holo was against hiring Nora as a bodyguard not only because they didn't really need one but also for the fact that Nora and Lawrence became close very quickly. Given that shepherds are enemies of wolves is factored in to Holo's initial dislike for Nora. Holo is a very proud "wolf" but does understand that she does not know everything; an example of this is when Lawrence explains why people get sick via the four humors.

Holo is a demi-human wolf and because of this, she has several abilities.

Appearances in Other Series[edit | edit source] 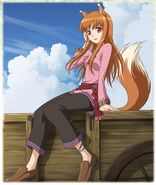 Even deities pay for overindulgence.

Add a photo to this gallery
Retrieved from "https://spiceandwolf.fandom.com/wiki/Holo?oldid=8975"
Community content is available under CC-BY-SA unless otherwise noted.