Norah Arendt (ノーラ・アレント), alternatively spelled Nora and known to some as Norah the Nymph, is a skilled shepherdess from Ruvinheigen who dreams of becoming a tailor. Her companion is a well-trained sheep dog named Enek.

Orphaned and without relatives, Norah lived and worked for most of her childhood in a Church convent annex that also served as an almshouse. When she was about a decade old, the almshouse lost its land to a swindler. Homeless, Norah fortunately discovered a wounded Enek shortly thereafter. As the dog was carrying a shepherd’s staff, Norah learned to be a shepherd and became employed again by the Church.

Though effectively raised by the Church, Norah became increasingly ostracized and suspected of witchcraft due to her unusual proficiency in shepherding. As such, her employment turned from a matter of charity to surveillance. Worse, the priest supervising Norah repeatedly tasked her to guide a pitifully small flock into dangerous areas of the countryside to test her abilities.

Aware of the Church’s suspicions toward her and the hazards of her occupation, Norah tried with limited success to gain financial independence by offering travelers around Ruvinheigen her services as a wolf deterrent.

Role in Spice and Wolf

While shepherding along the St. Metrogius pilgrimage road, Norah encountered Holo and Lawrence, who stopped to receive a traditional shepherd's blessing. Their chance meeting eventually led to Norah and her sheep becoming a key element in a desperate gold smuggling scheme. Despite risking death, Norah flawlessly completed her role in the scheme, simultaneously freeing Lawrence from his debt and getting the necessary funds to emancipate herself from the Church. She and Enek then headed for Kuskov in hopes of starting a new life.

Norah is an attractive young maiden with blonde hair, dark brown eyes, and “an honorably impoverished” countenance only enhanced by her naivety and servility. However, she has considerable inner reserves of courage, resiliency, and compassion.

In addition to guiding and protecting her flock, Norah is expected to customarily greet and bless travelers. The origin of this tradition is unknown, but the ancient greeting recited by all shepherds is preserved as follows: 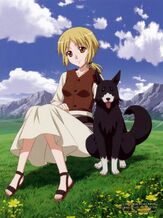 Norah with her canine companion, Enek 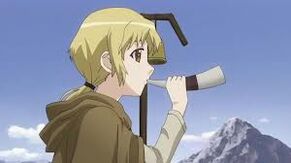 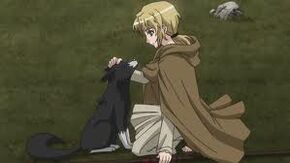 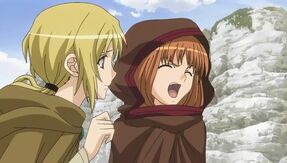 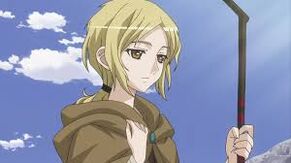 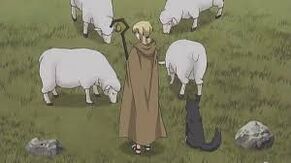 Norah with the flock of sheep 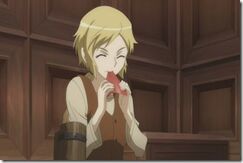 Norah is eating
Add a photo to this gallery

Retrieved from "https://spiceandwolf.fandom.com/wiki/Nora_Arendt?oldid=8539"
Community content is available under CC-BY-SA unless otherwise noted.