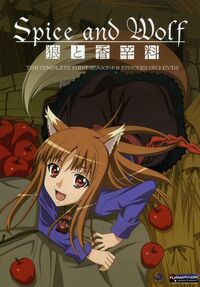 Spice and Wolf (狼と香辛料, Ōkami to Kōshinryō) is an anime television series adaptation of the light novels of the same name. The anime series is directed by Yoshiaki Iwasaki at J.C.Staff, with scripts handled by Michiko Itō, characters designs done by Haruko Iizuka, and music composed by Megumi Ōhashi.

Lawrence, a traveling merchant, finds a nude girl with the ears and tail of a wolf asleep in his cart. She is Holo, a harvest goddess with an untamed beast lurking inside. Armed with his street smarts and her animal instincts, a simple peddler and a forgotten deity journey through the countryside while reaping the riches of happiness and exposing the bankruptcy which dwells in the human heart.

There are 26 episodes total with two additional specials.